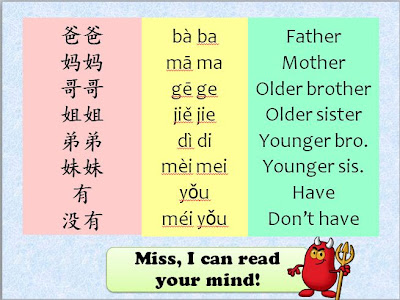 Teacher versus students. (You may spilt your students into groups.)
10 words on the board - key vocab.
Teacher write one of the key words on his/her board. Every students write 1 down too on their mini-whiteboard.
Students reveal their boards to the teacher, then teacher flip his/her over for students to see. If they have matched with teacher's words, one point given to the student who matched the teacher's word.
You may carry on up to 5 rounds, then calculate the points and see which group win in total. Reveal the box one by one, and get the students guess what's hiding behind the box. Students need to say the answer in Mandarin. 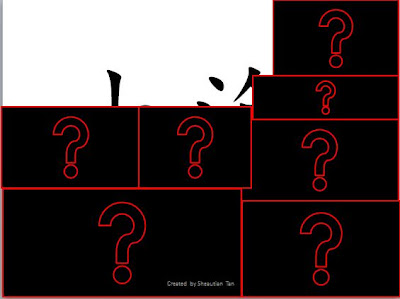 Reveal the box one by one, and get the students guess what characters hiding behind the box. Students may to say the answer in Mandarin/English. 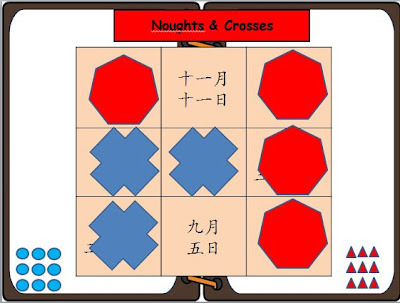 Split the students into two groups, one in blue team, the other one in red team.
Get two students from each team to play rock, paper, scissors to decide which team can make the first step.
Students pick the box they want, and they are required to translate the sentences into English or read the sentences in Mandarin. Teacher can then get the students from other team to check if the answer is correct.
Three in a row is the winner. 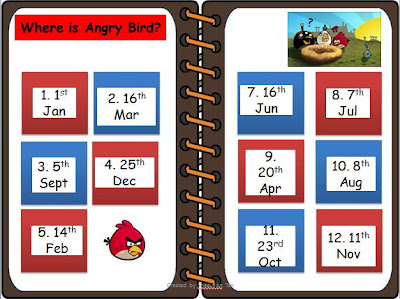 Get students to translate the words/sentences in the box. For example: No. 2, 16th March, 三月十六日
Teacher then click on the particular box that student translated and see if there is a picture of Angry Bird hiding behind it.
If they found one, prize (sticker) could be awarded; If there isn’t Angry bird picture, its next student’s turn to have a go. 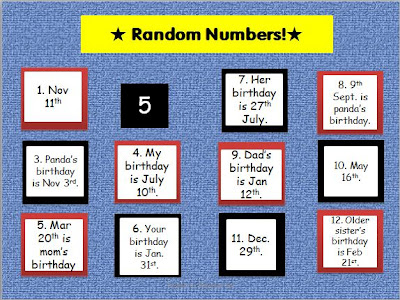 Spilt the students into groups
There are random numbers (including NEGATIVES) hiding behind all these boxes.
They need to translate the words/sentences into Mandarin, e.g. No. 2, Dad’s birthday, 爸爸的生日
Teacher then click on the box and see what’s the point the group get.
Game carried on until all the boxes clicked. After that, calculate the total points each group get.
The winner group with the highest points get prizes (stickers/ticks).

Changes you able to make in this template:
Colours
Words in the boxes
Numbers behind the boxes 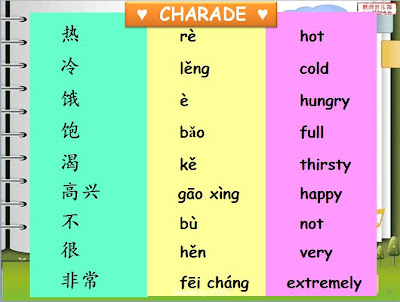 Teacher holds big flash cards on hands
Get 2 students coming out.
Student A has to read the words on the flash cards and act it out.
Student B need to guess what Student A acting, and say the answer in Mandarin.
Teacher may set a time limit for the students, if they able to finish all the words within the time limit, prize can be given. 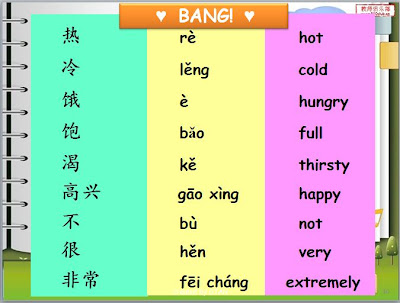 Get 2 students coming out, stand back to back, holding their hands like a gun.
Teacher says a phrase or word either in the Mandarin or in English
The 1st student to turn around, give the correct translation, then say 'BANG!' wins!
Students who earn 3 points first is the winner of the game.
Remind students not to forget to say "BANG!" :D 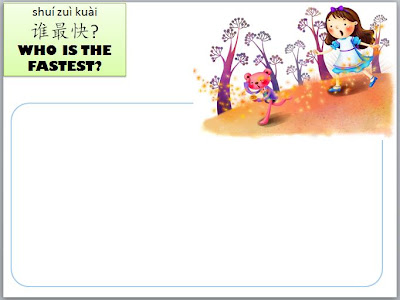 ↑
Game Title: Who is the fastest?; 谁最快?
Skills involved: Reading

Let’s say the topic students learning is Countries.
Teacher split the students into three group.
Each group has given a set of flash cards (All 3 set of flash cards are the same)
Students have to split the cards within themselves.
Game starts:
Teacher say a country word (e.g. 加拿大, Canada)
Students in each group who is holding the 加拿大 card, must stand up and hold the card high.
The quickest/fastest one got the point for the group.